The Lime Tree ( Tilia vulgaris)
The Lime tree which alternate names are, Basswood, Bast Tree and Spoonwood and also known as a linden tree in the USA . The lime tree produces a clear tall trunk and is a stately tree which grows in the deciduous forests of Europe, the British Isles, and the USA. It is the tallest broad-leaved tree in Britain. The 'common lime' can live up to 500 years and 'Avenues of lime trees are often found growing alongside the roadsides particularly in the UK. They were originally planted to provide shade in the summer and help prevent snowdrifts in the winter months.

An typical avenue of lime trees

Lime wood timber when seasoned is white to pale yellow and has a smooth, uniform texture with a soft close grain.  It is a light wood with no distinction between sapwood and heartwood. It is strong and resistance to splitting and worm damage. It is an excellent wood for making electric guitar bodies and model building and also for the excellent detail which can be obtained in intricate carving. It also glues well and polishes to a good natural or stained finish.

Common uses also include wood turning, toys, broom handles, hat blocks, the sounding boards and keys for pianos as well as artist's charcoal. They called the wood lignum sacrum, or sacred wood and during the Middle Ages statues of the Virgin Mary were carved from lime wood.  In Germany the tree was thought to bring fertility and prosperity, and was considered a sacred tree, the guardian of life and goddess of fortune, love and truth, therefore the lime tree was considered a tree of peace and it often formed the central meeting place of many villages and rural communities.

Ian carefully selects each piece of timber used for his various three-dimensional wood and base relief wood carvings. Whenever possible Ian tries to obtain the whole tree as with this particular 150 year old Lime tree which blew down in a winter storm in a small village called 'Sutton Montis', which is near Yeovil, Somerset in Southern England.

The various parts of the four feet wide trunk required for many of Ian's different potential carving projects, were carefully marked out and numbered before the trunk was cut into the desired length, any damaged or unsuitable timber was removed and discarded. 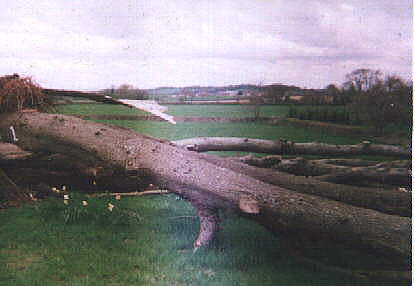 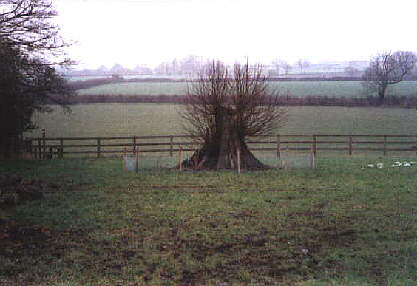 The Lime Tree   -  although the actual tree's trunk was removed new branches soon started growing from the remaining tree stump.

The lime wood is first cut into assorted boards and seasoned outside with 1 inch wooden battens evenly placed between each board. The top of the timber stack is then covered to protect the wood from the rain and sun. Seasoning is the controlled process of reducing the moisture content of the timber so that it is suitable for the environment and intended use. During the following few years air could freely circulate between each board to slowly dry the timber naturally. Once the moisture content of the wood has been reduced to around 15%, the boards are then re-stacked inside to allow them to reduce the moisture content still further and slowly reach room temperature before they are ready to be selected for the particular carving project. 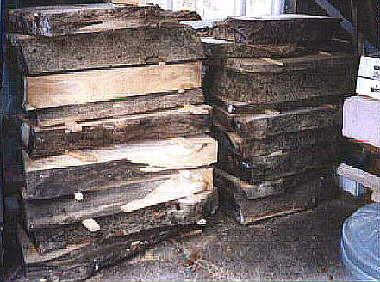 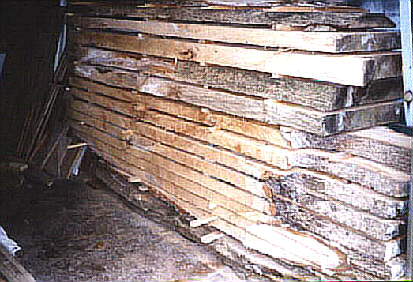 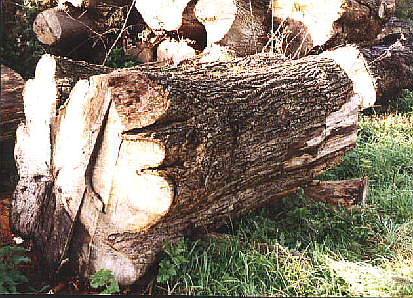 From any one large tree for the larger one-piece sculpture, a whole section of  the trunk is sometimes left intact, raised of the ground  The end of the log is also often painted to help reduce splitting on the end grain as it is drying out, the top of the log is covered over and allowed to season for several years.