Velsheda was built in 1933, the second of the four British J Class yachts, built in steel with a length of 128 feet, a draft of 15 feet, beam of 21 feet and a displaced of 143 tons. Only ten of these legendary racing yachts were built between 1930 and 1937, six in America and four in Britain, before their fantastic cost to build and run and the onset of a world war changed the face of yachting forever

After been saved from the mud flats in the Hamble, and after several years of restoration with faithful attention to detail in 1984, the classic yacht Velsheda could once again be seen in all her glory under her 7,500 square feet of sail racing in the Solent. 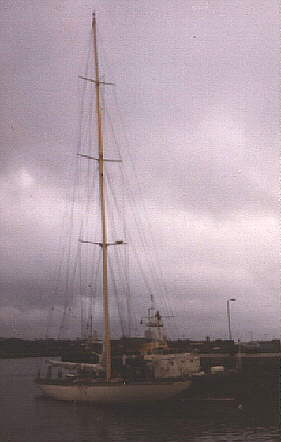 The complete Galley for the J Class Yacht Velsheda was made from solid Mahogany and built entirely in Ian's workshop using all the wood and cardboard templates he had previously made of all the various angles of the decks and sides where the galley was to be fitted within the yacht. The completed galley was then lowered down through the cabin hatch way in large sections and then bolted into position, these photographs were taken a few days afterwards.

Fortunately for every one concerned the vast majority of the galley was completed, delivered and fully fitted on board the yacht, just a short while before the fire which completely destroyed  Ian's workshop and contents, and just a weeks prior to the Velsheda's sea trials in the Solent and subsequent taking part in the Tall Ships race.

The only sections of the Galley required to complete the galley were the mahogany shelves, a plate rack and small cupboard which were almost finished but were now  unfortunately burnt in the fire in Ian's workshop, however he eventually remade these remaining items and they were placed on board when she returned from her successes at the Tall Ships race. 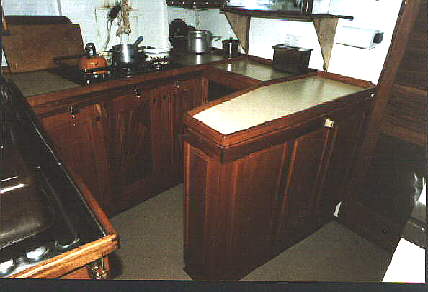 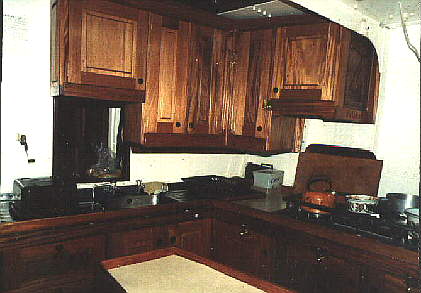 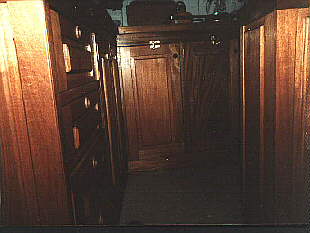 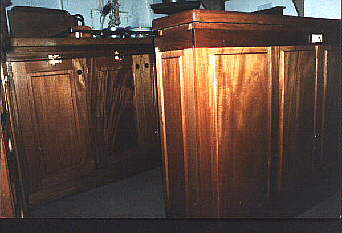